Some bacteria make energy in a process that is accompanied by transfer of electrons to a mineral. A previously unknown electron-transfer pathway now reveals an energy-generation system used by bacteria in the human gut.

The ability of certain bacteria to transfer electrons has been exploited for a variety of energy-generating applications, such as microbial fuel cells1, because the flow of charge carried by electrons underlies the process that generates electricity. It was thought that the capacity to achieve substantial levels of electron transfer occurred only in a specialized subset of bacteria. These microbes make energy by a mechanism that requires minerals for the electron-transfer process that accompanies energy generation2. Writing in Nature, Light et al.3 report the discovery of an electron-transfer pathway in gut bacteria, and reveal that components of this pathway are present in diverse microbial species. 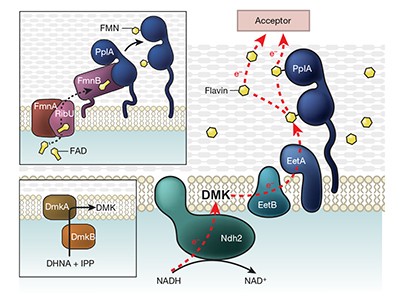 The molecule ATP provides the fundamental energy ‘currency’ for most cells, and is mainly produced by two mechanisms: fermentation, an anaerobic process in which ATP is generated from a limited repertoire of carbon sources, and respiration, a process that provides a high yield of ATP from a wide array of carbon sources and requires a compound that can accept electrons. In multicellular organisms, respiration involves electron transfer along an electron-transport chain that culminates in electrons being transferred to oxygen4.

By contrast, microbes can use a number of alternatives to oxygen as electron acceptors that enable respiration in anaerobic environments lacking fermentable energy sources2,5. For example, the bacteria Shewanella oneidensis and Geobacter metallireducens reside in mineral-rich environments, and these highly studied microbes have an anaerobic respiration process that uses minerals, such as iron(iii) oxide (Fe2O3), as respiratory electron acceptors2. However, because insoluble mineral deposits cannot be transported into the cell, mineral-respiring bacteria use a mechanism2 called extracellular electron transfer (EET), in which electrons are transferred to the exterior of the cell. In the case of these bacteria, this process involves electron transfer from an NADH molecule to components that include a quinone molecule in the lipid membrane and a series of proteins containing haem groups that provide a path for electron transfer. The loss of an electron converts NADH to NAD+, which is used in the energy-generation process.

The food-borne bacterial pathogen Listeria monocytogenes sometimes has a host-associated part of its life cycle. This bacterium can infect humans, and can proliferate in nutrient-rich environments that enable the use of fermentation as a metabolic strategy6. However, although L. monocytogenes has a life cycle in which neither minerals nor respiration is crucial for survival, Light et al. report that, when L. monocytogenes was placed in an electrochemical chamber in which an electrode can trap electrons, an electric current was generated, suggesting that this type of bacterium has the capacity for EET. This report now clarifies evidence presented decades ago7, indicating that this bacterium can change extracellular iron in the Fe3+ form to the Fe2+ form, an alteration that might indicate electron transport out of the cell.

Using a combination of genetic and biochemical approaches, Light et al., true to the name, shed light on the molecular basis of this newly discovered form of EET. They identified the proteins Ndh2, EetB, EetA and PplA as being key components of this process. They show that the initial electron-transfer steps of EET in L. monocytogenes resemble those already known in mineral-respiring specialists. For example, electron transfer from the cell cytoplasm to a quinone molecule in the lipid membrane is similar to the steps of a conventional electron-transport chain. However, beyond this point, the mechanisms become more distinct. L. monocytogenes is a Gram-positive bacterium, which means that it has a single lipid membrane and a thick cell wall. By contrast, S. oneidensis and G. metallireducens are Gram-negative bacteria, which have two lipid membranes separated by a region called the periplasm that contains cell-wall material. In these bacteria, tens of haem molecules bound to three types of protein establish a path for electrons to move across the periplasm and the outer lipid membrane8. By contrast, in L. monocytogenes, a single protein called PplA that contains two flavin molecules suffices to enable electrons to exit the membrane to reach the cell’s exterior (Fig. 1).

Light and colleagues analysed the distribution of the genes for this newly identified EET pathway in the genomes of different bacterial species, and provide evidence of EET activity in species other than L. monocytogenes using an electrochemical chamber. They reveal that EET activity occurs in an environmentally and evolutionarily diverse subset of Gram-positive bacteria, most notably in certain bacteria found in the human gut, such as those of the genus Lactobacillus.

This observation is intriguing because EET usually provides energy in anaerobic conditions, and growth strategies for such conditions can be important for microbial proliferation in the mammalian gut9. Indeed, Light et al. found that genes encoding components of the EET system they identified are required for L. monocytogenes to grow in anaerobic conditions. Moreover, when the authors monitored the ability of L. monocytogenes strains to colonize the mouse gut, the strains deficient in components of this EET system were at a competitive disadvantage, suggesting that EET has a key role in bacterial survival in this context. Investigating the role of EET in host–microbe interactions could offer an exciting direction for future research.

A central question raised by these findings is why EET might have evolved outside the context of mineral-respiring specialists. The bacterial environment may provide a clue. When microbes such as L. monocytogenes live in a host gut, they are immersed in nutrients, including flavin molecules, and Light et al. show that the presence of flavins potently enhances EET activity. The electron-transfer apparatus is simpler in Gram-positive bacteria than in Gram-negative bacteria. It stands to reason that an abundance of environmental flavins might produce a scenario in which evolution favours the minimal investment in protein infrastructure needed to enable EET in certain Gram-positive bacteria. EET might be used by certain mineral-respiring bacteria because it is crucial for their survival, whereas L. monocytogenes might use EET because it provides an opportunity to easily generate energy in certain environments.

The electron acceptor used by L. monocytogenes for EET is unknown. The bacterium might encounter conditions in which minerals represent an attractive electron acceptor, but it seems more probable that the highly reactive flavins in this pathway aid electron transfer to compounds such as organic soil components, disulfide groups on proteins or even other microbes10,11. If this is the case, in contrast to EET associated with specialized mineral respiration, the EET in L. monocytogenes might provide a more flexible mechanism for moving electrons to a variety of environmental acceptors.

It is a shock to the system to consider that microbes might be living highly charged lives in our gut. Light and colleagues’ work provides a foundation for future investigation regarding such microbial existence. Furthermore, the characterization of this previously unknown EET mechanism might create opportunities for the design of bacteria-based energy-generating technologies.